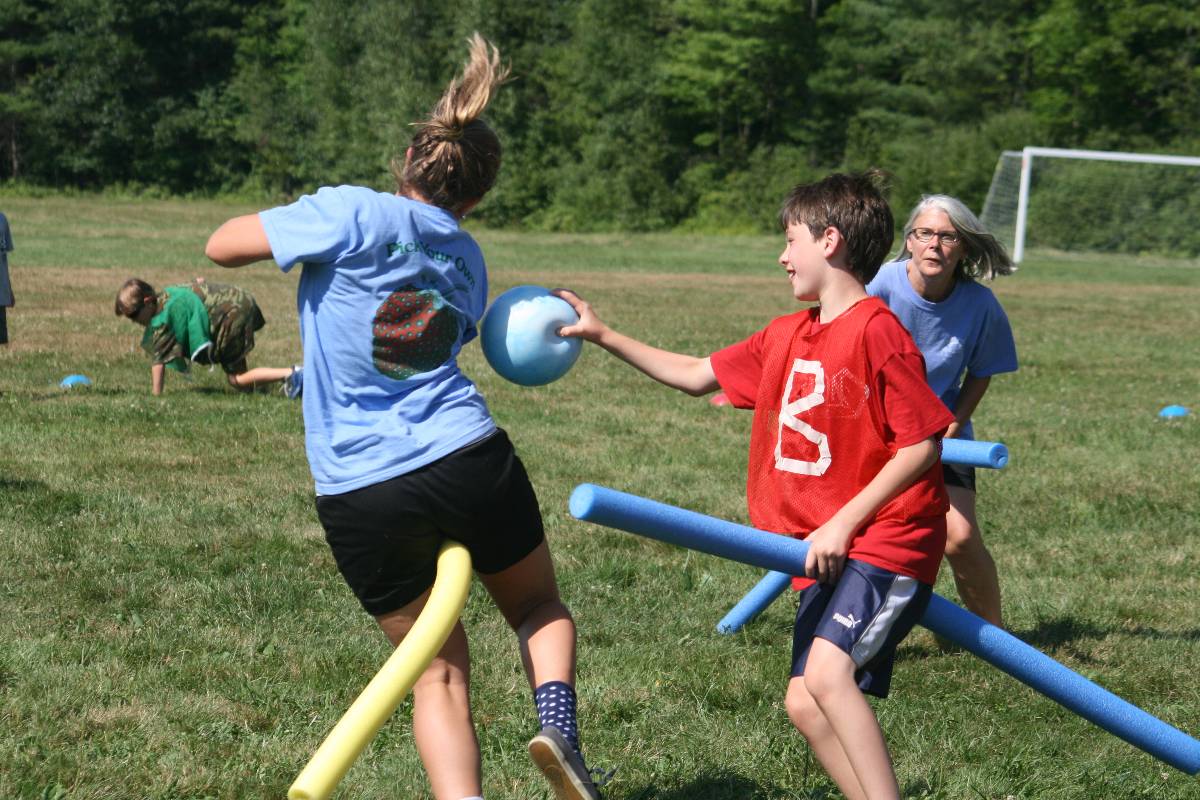 Imagine if Hogwarts had a day camp for aspiring young wizards. That thought wasn’t too far a stretch one afternoon this past summer at Horizons. It was “choice” period at Horizons, the only non-residential camp of The Aloha Foundation. On a broad grassy playing field, Chipmunks to Falcons — campers ranging in age from kindergarten graduates to nearly-out-of-middle-schoolers — were preparing for an important match. They wriggled into green or yellow pinneys and chose carefully among a pile of brightly colored swim noodles. Some of the children taped big letters — B, C, K — to their pinneys. At the ends of the playing field, three tall wooden stakes held hula hoops aloft — yellow, pale green, and, higher than the other two, pink. Together, the stakes and the upended hoops looked like enormous bubble wands — but were actually goals for the quaffle. The lettered pinneys stood for Bludgers, Chasers and Keepers. And the field was set for an all-out, campers against counselors, game of Quidditch.

Quidditch, if you have managed to make it thus far in the twenty-first century without opening a Harry Potter book, is the game of choice for young wizards. The eighth and final movie based on the series had opened earlier in the summer, and Quidditch was in the air at Horizons.

Much more was in the air, as well. Horizons runs three two-week sessions from late June to the middle of August. Of the 130 or so campers participating in the second week of the middle session, about 18 had elected to play in the Quidditch match. On tennis courts alongside the field where the quaffle hoops had been placed, young players hit balls back and forth with rhythmic thwacks. Campers worked on a dance routine in the Wolf’s Den nearby. A pulsing beat rolled out from the building; the dancers kept to the deep shadows on the hot, bright day. A row of archery targets stood at attention beyond the dancers. On a normal day, many of the Quidditch players would be pulling back their bowstrings and letting arrows fly toward the targets. Yet other campers were putting the finishing touches on a show — Cinderella, complete with music, costumes, and a set — for a parents’ open house that Friday, or sailing on Lake Fairlee.

“One of the things that’s unique about Horizons,” says camp director Tracey McFadden, “is that it has the feel of a residential camp” — all the activities, counselors, cabins that campers use like clubhouses, meals together in a burnished-wood dining hall looking out over the lake — “but at the end of each day, the kids go home and sleep in their own beds.”

Some campers come for more than one session. Each year, about a quarter arrive from outside the Upper Valley: Some are visiting grandparents, some stay in vacation homes nearby or are at Ohana, Aloha’s family camp. And some are the children of Aloha staff. As a result, Horizons has an international feel that is similar to Aloha’s other camps. Over the years, families have enrolled younger siblings of campers at Hive, Lanakila, or Aloha in Horizons as a way to introduce those children to The Aloha Camps.

On the Quidditch field, Will Vaccaro chased after the quaffle for Ravenclaw. The dark-haired 10-year-old had the round face of a young Neville Longbottom, from the Harry Potter books, but his wide grin and energetic pursuit of the blue quaffle  astride his green noodle was his alone. Will’s mother, Elizabeth, had been a camper and counselor at Aloha and now runs Horizons’  swim program. Opposing Will and the Ravenclaws were a faster, older, and larger side, all counselors — Slytherin House, of course. The campers, though, had a better command of Quidditch and its rules, and had been practicing, to boot. Almost immediately, a flurry of pale blue went through one of the hoops: 10 points to Ravenclaw!

One studious-looking Slytherin — counselor Miriam Whittington (aka Hermione Granger) from Hanover, New Hampshire — wore a blue oxford shirt and tie. Most Horizon counselors come from area towns. Assistant counselors must have completed at least one year of high school. Many continue through college. McFadden has instituted an apprentice program for Horizon graduates, beginning after their eighth-grade year. Miriam, along with over half of the other counselors, was a former camper herself starting at age seven and working her way up as an assistant counselor, lead counselor, and now an Archery (and Quidditch) instructor. In these ways, says McFadden, “through campers and counselors, Horizons creates strong and lasting connections between local communities and the camp.”  Eventually, the counselors’ age and coordination gave them the upper hand. In spite of several more goals from Ravenclaw and encouragement from the sidelines, the counselors won handily, even though the pale pink marble of a snitch remained hidden, somewhere in the grass.

Gryffindor took the field in red pinneys. Referee Ann Perry dropped the snitch somewhere and blew her whistle. Gryffindor’s pint-sized seeker — in real life a Blue Jay named Tyler Odell — flew around the field on his swim noodle broomstick wearing a dark red cape. Gryffindors scored on their first shot and then their second. Then things got a little chaotic, and as the combatants tried to clarify whether a bludger could throw a quaffle at an opposing player or needed to make direct contact, little Tyler found the snitch in the grass and held it up. Anne Perry blew her whistle. Match to Gryffindor!

The Gryffindors practically flew off the field. Watching the celebration around Tyler, the young seeker for Gryffindor, it was hard not to think of another young seeker, Harry Potter himself. Will and the other Ravenclaws quickly pulled on their green pinneys for a rematch.

“There’s not usually that much competition” at Horizon, McFadden says — though she admits that some kids sign up for the third camp session just for its “capture the flag” game on the second Friday, when the whole camp divides into red and blue teams. The Quidditch game had a certain ad-hoc feel to it — good energy and high spirits, along with a make-it-up-as-we-go-along playfulness — that seemed about right for a hot summer’s day. But the campers themselves seemed to hover in a magical balance between knowing that they were running around a field with swim noodles between their legs and feeling that they were actually flying through a Quidditch stadium on broomsticks.

There is freedom and nervousness, both, in being away from home, as young wizards and campers know — even if only for the day. In the right balance, it heightens a child’s sense of wonder and imagination — when for the space of a sunlit afternoon, swimming noodles are broomsticks and you can really fly, and somewhere out in the grass you might find the golden snitch. There’s magic at Hogwarts, and there’s a little bit of magic at Horizons Day Camp, too.