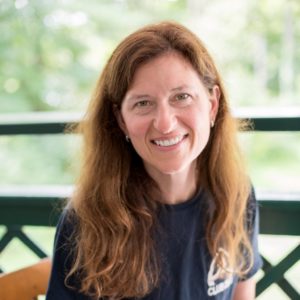 Sarah Gordon Littlefield began as a camper at Aloha in 1983, and after moving through the Club and Midi programs, she became a counselor in the Campcraft Department (Woodchuck Hole). She was a tent counselor, Mama Woodchuck and Head of Club before acting as Assistant Director for eleven summers.

“Gordo” received her B.A. in Spanish and English from Middlebury College, and her Ed.M. from the Harvard Graduate School of Education. Before becoming Aloha’s sixth Director, she worked in independent schools and school consulting for fifteen years, and she owned a healthcare business in the greater Boston area for six years. She lives in Reading, Massachusetts with her husband Chris, and two children, Johnston and Hayes. Both boys grew up spending summers at Aloha from infancy, and both attended Horizons and Lanakila.