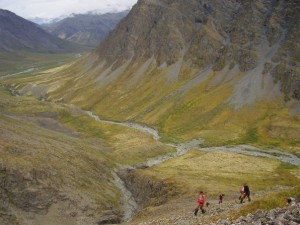 “Facebook ruined our trip!” It was Day 18 of a 45-day wilderness journey through Alaska’s Brooks Range, and it had been raining steadily for days. The group of young women, irritable, soaked to the skin, and their two instructors had stopped for one of the myriad decisions on such a trip — what route to follow, when to stop, where to set up camp, what to cook, who leads, who follows — when 17-year-old Mallory Brooks burst out with her cry of complaint.

Like the other girls standing in the rain, Mallory considered the trip a rite of passage, the culmination of many years of preparation. That preparation had begun at the camp they’d all attended in Wisconsin, where Mallory had spent seven summers. Many campers chose to go on expedition trips before they returned to the camp on staff. Mallory had been looking forward to the Alaska trip ever since she’d returned from a 28-day backpacking trip through the Wind Rivers the year before.

She had hardly been alone in her excitement. The group of teenagers had formed a small online community several months before they left, getting to know each other, checking gear lists together, and keeping a countdown until the day the trip started. Now they stood sniping at each other in the boggy tundra that stretched out endlessly in every direction, equally bogged down in their decision making. Mallory continued: “We thought we were best friends,” she said, “but we don’t even know each other!”

Laura Beebe, one of the two instructors, knew that many teenage girls avoid conflict. At that age, she understood, differences of opinion often end friendships: Girls are more likely to go their separate ways, or to express conflict in passive-aggressive ways, instead of addressing issues directly with one another. But any group traveling and working together so closely is bound to have some conflict, especially when the conditions become uncomfortable.

Laura could tell that the group was close to an internal boiling point. She wasn’t surprised that someone had decided to talk, or even that it was Mallory — experienced and forthright — who had brought it up. Every trip had its challenges, and addressing them was part of the learning process. She was surprised, however, to hear a social networking site mentioned several hundred miles from the nearest Internet connection.

It was the first time Laura had seen the effects of “life lived online” on a wilderness trip. At the time, she was still in her twenties — not that much older than the teenagers she was leading — but she’d come of age using email and cell phones; the young women on that trip were growing up in an age of online social networks. Later on, Mallory, taking courses in college, would come to believe that the group had bypassed three critical stages of group development identified by psychologist Bruce Tuckman, “forming,” “storming,” and “norming,” and tried to go straight to “performing.” Thanks to Facebook, she and the others thought they had formed a functioning group even before gathering in person.

Out on the tundra, Laura saw that Mallory and the other teenagers needed to learn to be friends as they actually were, not as constructs they’d created online. They needed to develop trust in the resilience of their relationships and find ways to handle their differences. The group set up camp not far from where they’d stopped, and began to talk, really talk. Recalling the trip, Laura says, “They had started out being overly positive about everything and everyone on the trip. After they hit that wall, they could see ways they weren’t working together. Even small things, like saying ‘I don’t care’ or ‘Whatever’ or ‘Let’s just get there,’ are ways of not being responsible for the group and not supporting whoever is leading.”

“I don’t want this to be who we are,” one girl said, through tears.

“I do this to my mom all the time, and I don’t know why,” said another, hearing that she rolled her eyes while others were talking.

Reflecting on the comment that started the process, Mallory’s indictment of Facebook, Laura says, “There’s a progression of friendship. We learn to read body language and tone of voice; we learn how to respond to it. You can’t just say, ‘I won’t read that message.’ You aren’t hidden behind some screen. You have to get into the tent at the end of the day. You have to get up and work together the next day.”

The two instructors helped the young women start again. The group crossed an enormous scree field the following morning. Laura heard a new honesty and new respectfulness among the girls. She saw them stepping forward more readily and sharing their ideas and opinions more directly.

Facebook did not ruin that trip, of course. The group re-formed on more solid emotional ground and began to work smoothly. The changes Laura saw on the scree slope continued through the next month. The young women began to lead themselves — taking turns, sometimes along and sometimes in pairs, making key decisions — as their instructors stepped back into safety and advisory roles.

Mallory, who had long found comfort in nature, felt at home in the rugged landscape and increasingly at home in the group. The lessons continued, though. Near the end of the trip, serving as co-leader, she found herself at odds with the other leader about their route. She was confident that she knew where they were. The other girl wasn’t convinced; she thought they were at another point on their maps. The power struggle lasted all day, even as the group continued hiking, each girl stubbornly holding onto her belief that she was right and the other was wrong.

“I was ready to give up,” says Mallory, now a college senior majoring in psychology. But she didn’t. Instead she called on some of the lessons she’d learned on the trip: Use all the resources around you. Ask for help. Really look at where you are.

“Where we really were ended up being trivial,” she says now. “That was another lesson: that it didn’t matter that much.” She remembers thinking that even though it had been a rough day, she was glad she’d had the chance to learn that lesson. She knew she’d put it to use, along with her new self-confidence and self-knowledge, almost immediately: She’d be starting college in less than a month.

Mallory counts her time in the Brooks Range as one of the most important, and transformative, experiences of her life. On the one hand, it was one of the hardest things she’s ever done. Spending weeks in the wilderness — with the unpredictable vagaries of wind and weather, with long, physically demanding days, with inescapable group dynamics — is by nature a stressful situation. And yet, paradoxically, it was the support of the small group, a group that eventually learned to trust one another and work together, that ultimately made it possible for each of them to face the challenges of the larger world.

In 2010, Laura Beebe was named the director of the Young Women’s Leadership Program at The Aloha Foundation. Her experience leading a group of young women in Alaska resonated in Vermont, where girls have been learning resilience and leadership in the outdoors for more than a century. That resonance deepens with the creation of Aloha’s first leadership expedition in July 2011. The expedition takes place over three weeks in northern Quebec, in an open landscape similar to the Brooks Range. “There’s no trail,” Laura says. “No single right way to move forward.” 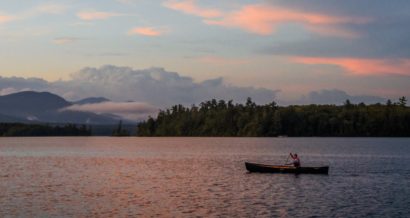