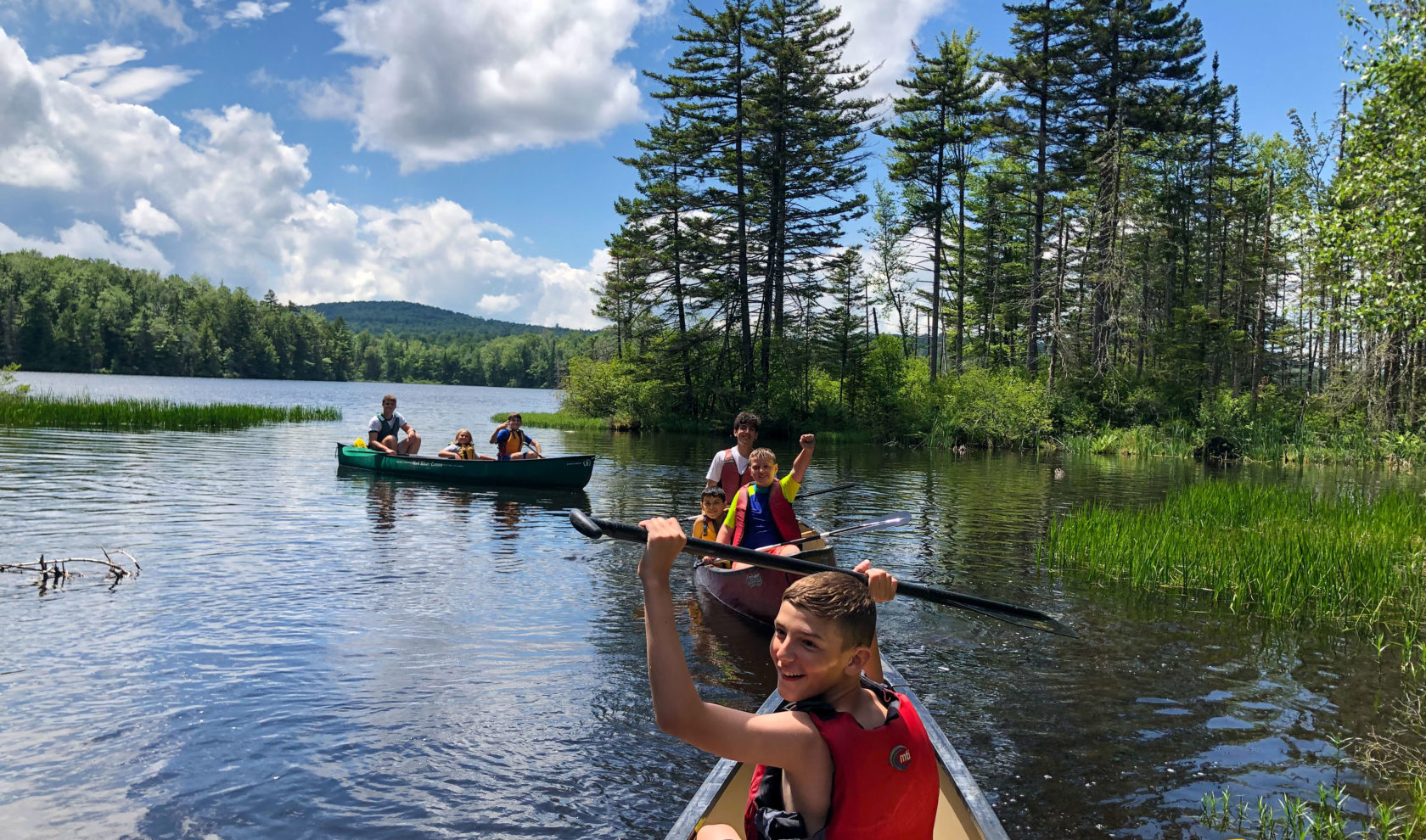 Welcome! We’re so glad you stopped by and are interested in learning more about Aloha Foundation camps and programs.

You will find lots of information here – and we’d also love to hear from you directly anytime. Just call our main office at (802) 333-3400. Thank you!

To inspire people of all ages to learn, explore, grow, and become their best selves.

On June 30, 1905, Edward Gulick (“Father Gulick”) took his children – Leeds (13), Helen (11), Carol (8), and Harriet (6) – to meet the train in Fairlee, Vermont. There they greeted Aloha’s first twenty-three campers, tired after arduous travels by horse and carriage and a succession of trains. Once in Fairlee, some of the exhausted girls proceeded to Aloha Cottage aboard the Lake Morey Steamer while some finished the journey by horse and carriage. Trunks and duffels followed by wagon up the dusty lake road.

Aloha’s first Opening Day was unique and yet as exciting as it is today, with children and adults  anxious about making a wonderful beginning to the summer. It was especially fulfilling for Edward and Harriet Farnsworth Gulick – known always at Father and Mother Gulick – after a long winter of hard work in planning, arranging, and corresponding with prospective campers, counselors, and parents. In the dawning days of camping for girls, the Gulicks’ generosity and imagination led them to view their summer cottage as an unparalleled opportunity for girls, including their own three daughters.

Mother and Father Gulick could imagine what women could become in America and in the world. They saw how a summer outdoors in nature, with good role models, creative fun, and healthful activities could help girls develop into young women prepared to accomplish great things in the world. To them, understanding one’s inner life was equally as important as taking part in activities. Most important of all was developing an appreciation for getting along with fellow campers and for service to others. This strong ethic of service to others had been passed down through both the Farnsworth and the Gulick families, who were known for their missionary work (in Turkey and Hawaii, respectively) and for their pioneering work in American camping.

In 1910, the Gulicks opened Aloha Club for campers ages 18-80 on the secluded shore of Lake Katherine in Pike, New Hampshire. With almost no population nearby and very few automobiles, the whole countryside was theirs to explore freely. Helen Gulick King was Director and Mother and Father Gulick visited for inspirational talks. These were adventurous and independent women, consciously carrying their Aloha heritage in all they set out to do.

The success of Aloha Camp and Aloha Club inspired Mother and Father Gulick to imagine how camp could benefit younger girls. Having purchased 400 acres of farmland on Lake Fairlee in Ely, Vermont, they envisioned all kinds of swings and hammocks for play, a green for dancing and games, and even a pen for pets. Hive’s first Director was Ellen Farnsworth, Mother Gulick’s sister, followed later by Mary Knapp, Helen Gulick King, and Helen Shaw, who each brought her own personal touch to Hive. Favorite Hive treats were climbing hilltops or hiking through the woods to neighboring Wilson Farm, where campers could sleep in the hayloft overnight. The adventure of a tent family overnight in Hive’s own houseboat was a great incentive for learning how to swim. Each Hiver was guided and helped closely by her counselor, and at the same time, she was encouraged to develop her own personality, stand on her own, and take responsibility. Whether feeding a lamb, performing in a show, or hiking a mountain, campers found Hive a magical place for their imaginations.

The next question to occupy Mother and Father Gulick’s imagination was “what about all the little brothers of Aloha and Hive campers?” They envisioned a far different approach than the military camping that prevailed for boys in those days: a camp that promoted a spirit of adventure, discovery, creativity, respect for others, and individual growth. Granted, Mother and Father Gulick’s first zeal was to fill the cavernous need for girls’ camps, but since numerous sons of staff usually spent the summer at Aloha, the Gulicks knew the Aloha Spirit would work well for boys, and that Aloha and Hive parents wanted a camp for their sons.

Having purchased the grounds of a failed girls’ camp on the north end of Lake Morey in 1921, the next summer they opened a camp for boys from eight to thirteen years of age. “Lanakila,” which means “victory” in Hawaiian was defined as one’s personal effort, a victory over self. A camper could choose to challenge himself, by concentrating on a personal  goal for the summer, or by working on the Viking honors. Chauncey Hulbert, husband of the Gulicks’ daughter, Carol, was Lanakila’s first Director. When he died only two years later, a very young “Mrs. Carol” courageously took up the reins.

Peacetime in the 1920s and 1930s brought its own challenges, both economic and social, and the Gulicks made program adjustments as needed. When automobile touring became a popular venture in the 1920s, fewer women flocked to Aloha Club, and since that campus had been built on rented property, it became economically impractical to continue operating on Lake Katherine. Instead, Club became the eldest unit at Aloha Camp, where young women could learn to be counselors.

The Great Depression also brought a decrease in the camps’ population. From Aloha’s Opening Day, Mother and Father Gulick had sought to help the Aloha communities understand the world’s economic, social, and political upheavals of their time. As their own childhood years had been spent in Turkey (Mother Gulick) and Hawaii (Father Gulick), a strong international understanding led them to respect the inherent value of different cultures. One way they could encourage world peace was to bring campers from all over the world to Fairlee.

During World War II, Mother Gulick, Mrs. Helen, Mrs. Carol, Mary Knapp, and Helen Shaw kept their attention on developing young women and men of spirit and skills. The camps offered the same swimming, canoeing, woods and mountains, nature study, riding, music and dramatics, and arts and crafts. Additions to the program were vegetable gardening and haying to help their neighbors, and at Aloha, planning for cooking and nutrition, sewing and knitting (some for the Red Cross), household mechanics such as chair repair and plumbing, home nursing and first aid, typing and automobile mechanics. Where the Lanakila barn stands now was a huge Victory Garden, which was planted earlier in the spring and it fed quite a few. Many of the Lanakila staff joined the war effort. The whole Aloha community was concerned for the welfare of their men overseas and followed the war news carefully.

As she had throughout World War 1 and the Great Depression, Mother Gulick continued her informative, inspirational talks aimed at providing a constructive viewpoint for their children in all three camps. After Father Gulick’s death in 1931, Mother Gulick continued for twenty years more as the central, caring presence for all the campers. She passed away in February 1951 at the age of 86. As the Aloha family mourned her loss, the campers carried on with the strength of the Gulick traditions and values she had taken care to secure.

The Alohas continued under the leadership of Helen Gulick King at Aloha, Carol Gulick Hulbert at Lanakila, and Helen Shaw at Hive. However, in the mid-1950s, the camps faced a major challenge as members of the Gulick family’s next generation followed pursuits other than the management of Aloha, Hive, and Lanakila. Realizing that the camp mission was too valuable to abandon, Mrs. Carol began exploring alternative ideas with a dedicated group of parents including Don Williams, Matthew Bender IV and John Bartol (themselves former campers), and Marty and Elliot Baines (parents of four Lanakila campers).

With imagination, this group and the Gulick family eventually agreed to create the Aloha Foundation, a non-profit organization that would buy the camps from the family for $300,000. Run by a Board of Trustees made up of alumni and parents, the Foundation would continue operating the camps and endeavor to sustain the Gulick traditions of creating fine people, promoting service to others, providing love, laughter and caring, and teaching through venturous experiences in their beautiful Vermont setting.

After incorporation in 1968, the Foundation took on such tasks as procuring supplies, keeping up the buildings and grounds, and hiring Camp Directors.

The Hulbert Outdoor Center opened in 1978.

Years later, Horizons Day Camp (1997) and Ohana Family Camp (2008) were established just across the water from each other on Lake Fairlee.

Community members from near and far gathered in Fairlee, Vermont to celebrate the Aloha Foundation’s 50th anniversary in 2018.

We offer camps and programs for people of all ages. Let’s talk about you, your child, your family – and discover together which experience you would value most. There are many options and possibilities!