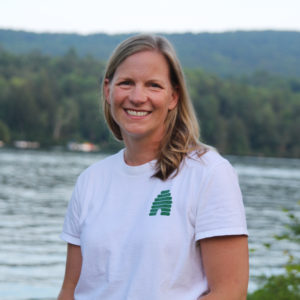 Ellie first came to the Alohas as a Hive counselor in 1998. Back then, pine trees surrounded the Comb and the Hive office received its first computer. In the two decades since, Ellie has remained connected to the Aloha community—as a Hive staff member for seven years and also as an Aloha, Lanakila, Horizons, and Hive parent. During the summer 2019 season, Ellie served as an integral member of Hive’s leadership team as assistant director, working side-by-side with Kathy Plunkett and key staff on programming, staff training, camper support, parent communications, operations, and everything in between. Ellie was named Hive’s director in 2020.

Outside of camp, Ellie has dedicated her career to supporting children and families. An experienced educator, she spent 10 years at the Hilltop Montessori School in Brattleboro, Vermont, most recently as the Founding Director of their Toddler Program. She now serves on Hilltop’s Board of Trustees. Ellie has a BA in Psychology from Miami University in Ohio and a Master’s in Education from Loyola University Maryland. She and her husband, Andrew, live in Rockingham, Vermont with their three children.